It has been revealed that three of the members of the Rochdale grooming gang now once again reside in the town they terrorised.

The men are known to be back in Rochdale, astonishingly just three years after losing the right to stay in Britain.

Victims of the grooming gang have expressed their horror after learning the men who haunted them were back on the doorstep, despite a judge rejecting their appeals against their British citizenship being revoked.

Left to right: Adil Khan, Abdul Aziz and Abdul Rauf have been revealed to still live in Rochdale, two years after losing the right to stay in Britain

The news was revealed by the Mirror, who one of the group’s victims told she felt ‘violated’ by their return.

One of the men, Abdul Rauf, 51, is a father of five, a taxi driver and a former teacher at a mosque. His sentence was six years for trafficking and sex with a girl, who was aged 15.

Another, Abdul Aziz, 49, carried the more sinister title of ‘the master’ and is a father of three. He was originally sentenced to nine years for trafficking and conspiracy to engage in sex with a child.

The third, Adil Khan, 50, was given eight years for conspiracy and trafficking a 13-year-old girl who fell pregnant.

All three men have served their sentences. 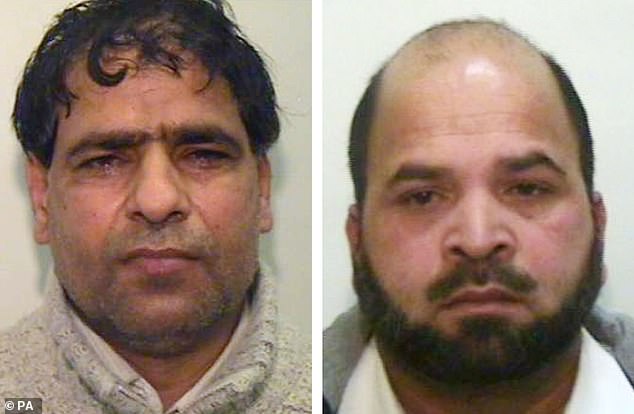 Abdul Aziz and Qari Abdul Rauf, pictured, also have dual citizenship. The Home Office refused to comment whether deportation proceedings were active against any of the four men

News of the men’s return became public knowledge after images surfaced on social media, with people in the Rochdale area sharing the information to friends and family.

One of the gang’s victims told the Mirror: ‘I feel violated to know he’s living near me – in the same area where he hunted for girls like me.

‘It’s a total betrayal of grooming victims that he’s allowed to stay.’

In 2017 the men had appealed against moves by the Government to strip them of their British citizenship.

But their claims were dismissed on all grounds by the Upper Tribunal of the Immigration and Asylum Chamber. 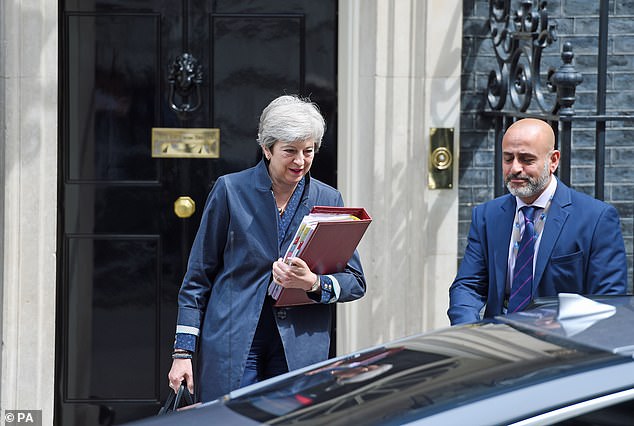 Theresa May, who was Home Secretary when the men were jailed said the four dual citizens should be deported

The then home secretary Theresa May ruled in 2015 that all three men – who have dual British and Pakistani nationality – should have their names deleted from the roll of British citizens.

Lord Justice Sales said that what they and others did to vulnerable girls in Rochdale amounted to ‘serious organised crime’.

Gerald Clifton, the judge who jailed them at Liverpool Crown Court in May 2012, said victims were ‘raped callously, viciously and violently’.

As revealed by the Mail in June 2019, four of the group were still living in Britain, with no signs of any being prepared for deportation to Pakistan.