Transport for London (TfL) has issued an apology after a London Overground worker was caught travelling on a Victoria Line Tube train while wearing a face mask under her chin.

Julia Wakefield shared a photo to Twitter this morning showing the employee with the face covering pulled down beneath her mouth and nose.

She said the image was taken by her sister, and criticised the mass transportation operator for failing to ‘set an example’ to passengers.

In response, TfL said it was ‘very sorry’, adding that ‘staff should know better’ and the complaint would be reported to management. 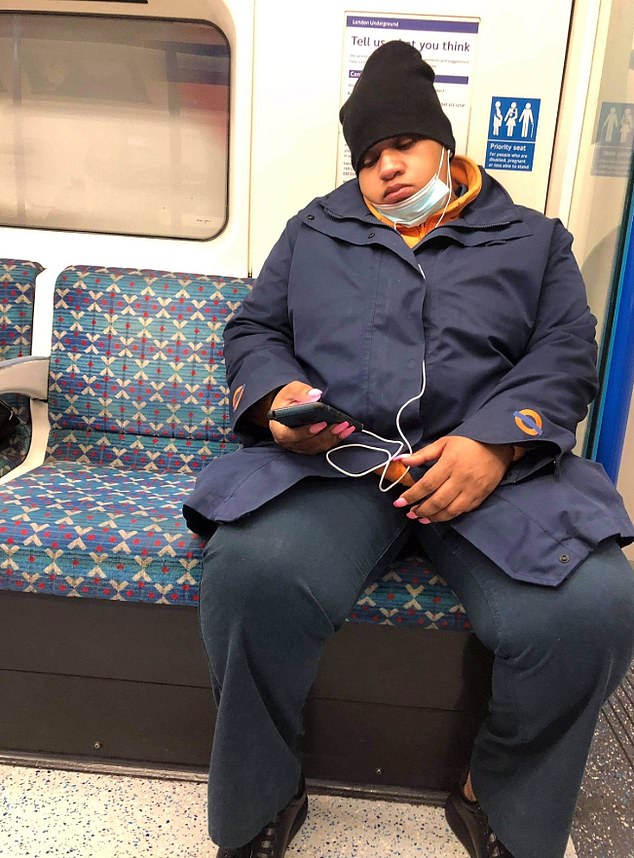 Julia Wakefield shared a photo, pictured above, to Twitter this morning showing the employee with the face covering pulled down beneath her mouth and nose on the Victoria Line train

Ms Wakefield told MailOnline: ‘It was my sister who sent me the photo and she said seeing people without masks is a daily occurrence on the tube.

‘I just think that with so many people ignoring the rules about masks at the moment, TfL staff should really be setting an example.

‘How can they expect people to wear masks when they can’t even do it themselves?’

Posting the photo, she had earlier tweeted: ‘TfL excellent use of a face mask this morning…’

TfL replied: ‘Hi Julia, very sorry about that. That’s unacceptable, staff should know better and we need to lead by example.

‘Really appreciate your feedback, I’ll make sure that this gets fed back to management. I hope you get to your destination soon and your day gets better.’

On its website, the local government body states that face coverings must be worn for the ‘full duration of journeys’ on public transport in the capital city, including inside stations, taxis and private hire vehicles.

It adds that those who do not wear a mask on the network could be denied travel or receive a minimum £200 fine – reduced to £100 if paid within two weeks.

In line with Covid-19 rules, masks must cover both the nose and mouth and should not be removed mid-journey unless to eat, drink or take medication.

Repeat offenders will have their fines doubled at each offence – and after the first offence there is no discount, so the second fine is £400 and the third £800 up to a maximum of £6,400.

One social media user reacted to the photo, commenting: ‘Half my carriage this morning was either like this or no mask at all and it’s not unusual to see every morning. 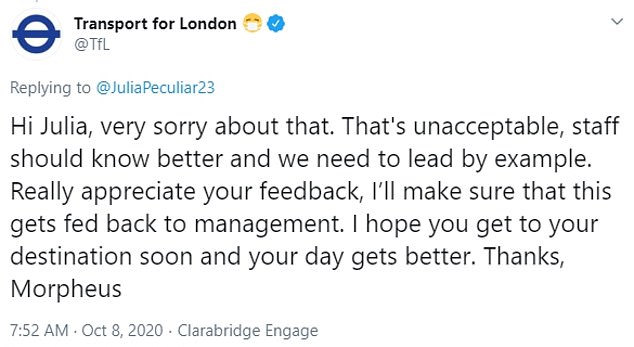 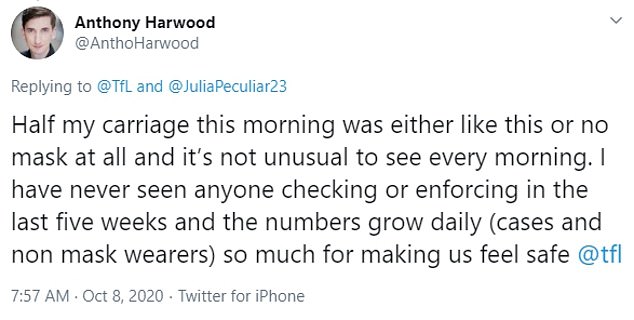 Ms Wakefield’s tweet accompanying the picture and TfL’s response, saying it was ‘very sorry’ and that ‘staff should know better’, alongside a comment from another social media user

‘I have never seen anyone checking or enforcing in the last five weeks and the numbers grow daily (cases and non mask wearers) so much for making us feel safe @tfl’.

In response to a post from the transport operator reminding passengers to wear face coverings, another Twitter user said: ‘I reported to TfL yesterday that their staff were using no face covers or they were pulled under their chins.

‘I’ve used the network throughout this pandemic and TfL staff never wore face covers and never told anyone else. Police were at some stations but they didn’t wear them.’

A third added: ‘Yes face coverings must be worn but who is there to enforce this rule?

‘I am yet to see someone fined or refused entry on public transport is they’re not wearing face masks. What is TfL doing to protect us from people that refuse to wear face coverings?’ 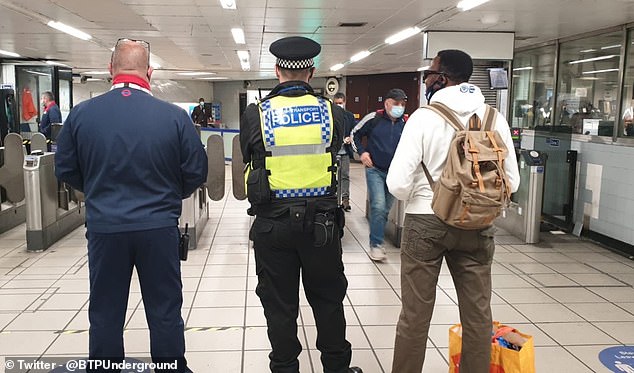 The tube operator confirmed on Monday that since July 4, enforcement officers have stopped 7,613 people in breach of Covid-19 rules from boarding and removed 1,780 from services.

Excluding police enforcement figures, TfL has also issued 491 fines to passengers who refused to comply with the rules over the same time period.

British Transport Police (BTP) have given out 51 fines after stopping 50,729 people between June 30 and September 8.

BTP made 3,545 ‘interventions’ with passengers on public transport who were not wearing coverings approached by officers and asked to leave.

Face coverings were made compulsory in England on public transport on June 15, in shops on July 24 and a series of indoor locations on August 8.

The only other two forces enforcing fines against those breaking the rules have been Lancashire Constabulary with two and Lincolnshire Police with one.

Social media users reacted to a post from TfL urging passengers to wear face coverings, with one saying they reported tube staff ‘not using’ face coverings or pulling them below their chin

With the fines standing at £100 for first offences, this means just £300 worth of fines have been issued by police forces excluding BTP, who patrol trains across Britain.

The findings came from a series of Freedom of Information requests sent to all 40 forces in England by London-based marketing agency Reboot Digital.

Separate figures issued by the National Police Chiefs Council last week suggested police have given out 61 fines for failing to wear a face covering on public transport, up from 38 up to the middle of August, while 28 were handed out for not using a mask in shops.

The greater number could be because six forces – including the Metropolitan Police and Greater Manchester Police – did not respond to Reboot’s survey.

Last week Stanley Johnson, the father of Prime Minister Boris Johnson, apologised after being photographed in a shop in London without a face mask.

Face masks must be worn on public transport and in many indoor spaces, including shops, shopping centres, indoor transport hubs, museums, galleries, cinemas and public libraries.

If necessary, the police and Transport for London (TfL) officers have enforcement powers including issuing fines of £200 (halving to £100 if paid within 14 days).

It comes after the World Health Organisation and numerous studies suggested they are beneficial.

As announced, the Government will bring forward changes to mean that for repeat offenders these fines would double at each offence up to a maximum value of £6,400.

The Prime Minister has also announced tougher enforcement measures, with businesses facing fines or closure for failing to comply with coronavirus rules, meaning there will be consequences for pubs that try to serve you at the bar.

National Police Chiefs’ Council chairman Martin Hewitt said: ‘Individuals, businesses and households all have a responsibility to ensure the virus is suppressed and police will play their part in supporting the public to navigate the measures in place for our safety.

‘Our approach of engaging with people and explaining the regulations in place will remain. The vast majority of situations are resolved following those two stages, with little need for further encouragement or enforcement action to be taken,’ he said.

‘Police will continue to work with their communities and only issue fines as a last resort.

‘Chiefs will be stepping up patrols in high-risk areas and will proactively work with businesses, licensing authorities and local authorities to ensure the rules are being followed.

‘If members of the public are concerned that the law is being broken or they are experiencing anti-social behaviour, they can report this to the police, who will consider the most appropriate response and will target the most problematic behaviour.’