A RIOT has broke out at a St. Louis jail, seeing inmates smashing windows, starting fires and throwing refuse to the street below – much to the celebration of onlookers.

The chaos, involving up to 60 inmates, kicked off at the City Justice Center at around 9pm last night, just weeks after a similar violent uprising at the prison. 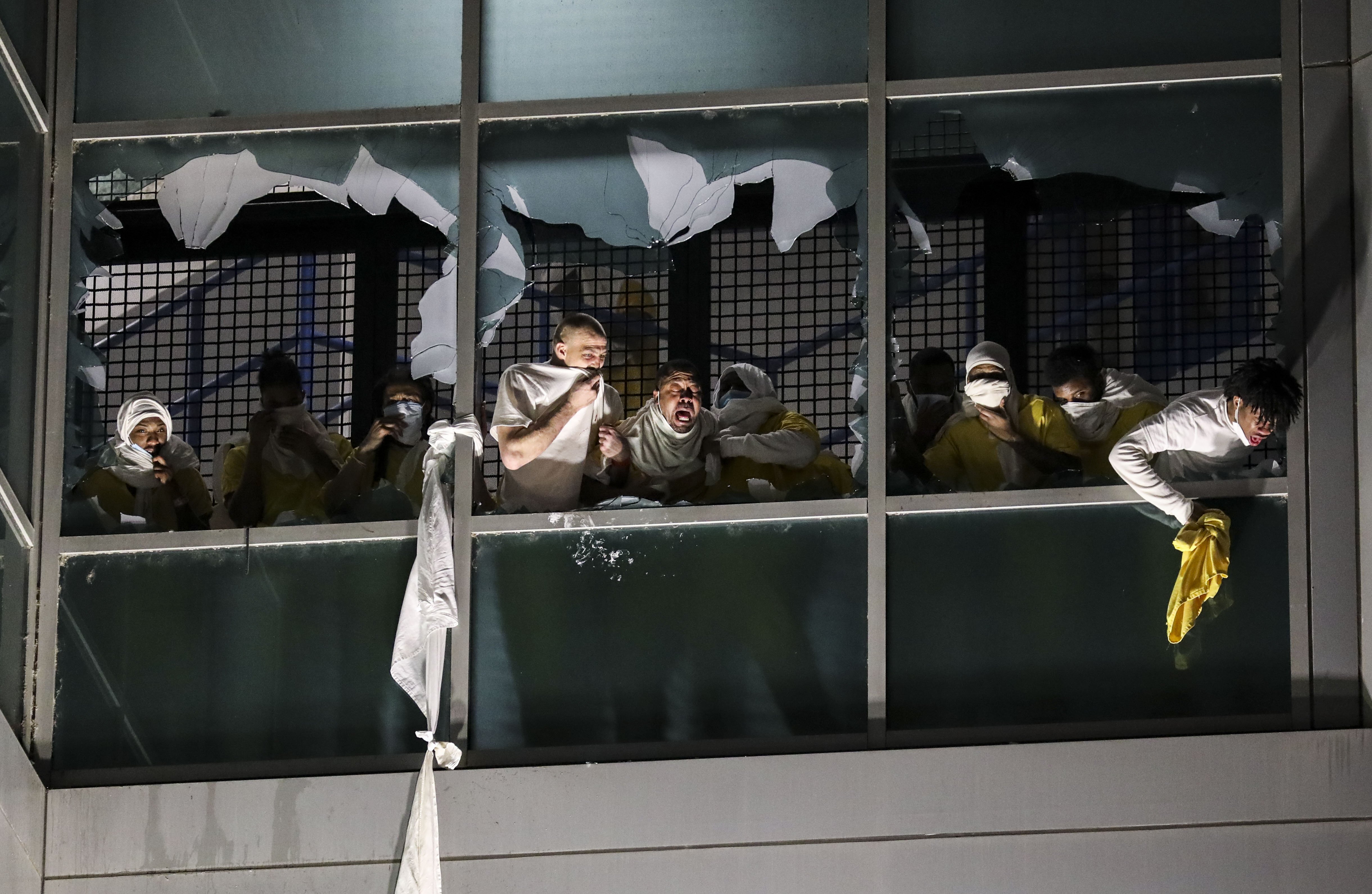 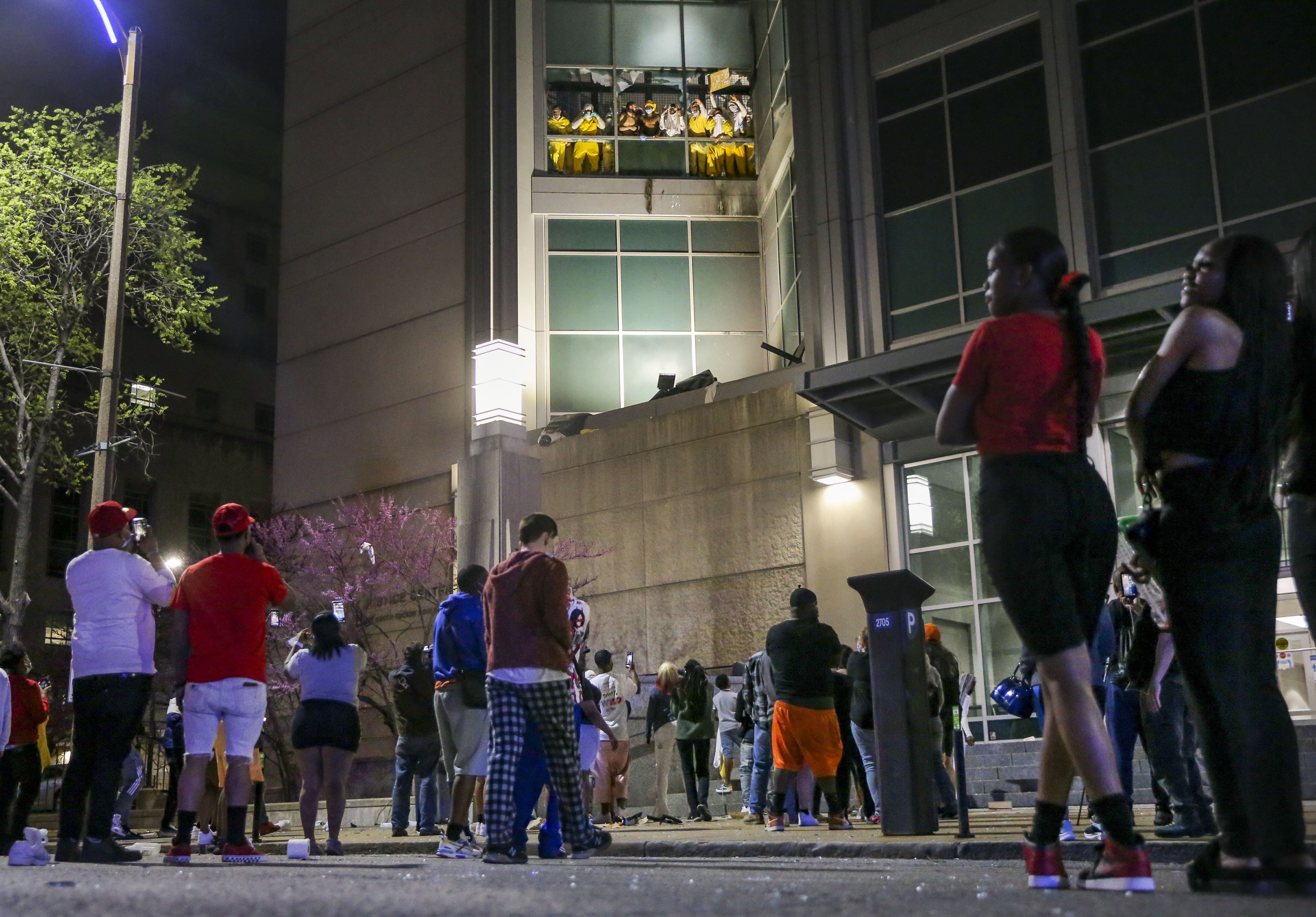 Prisoners could be heard chanting "we want court dates," while hurling debris – including a computer, a chair, and their own clothes – to the ground from the third floor.

Some also held signs emblazoned with "Free Ace" and "Free LJ", according to reports.

A substantial crowd gathered on the streets below, largely made up of relatives of inmates, to watch the drama unfold and protest the "inhumane conditions" in the jail.

After covering security cameras, the rioters broke a window and launched objects out of it before a fire broke out on the floors below them.

The rioters tied together bed sheets, set them on fire, and dangled them outside, forcing firefighters to douse the flames as smoke enveloped the detention center.

They also allegedly dropped a makeshift rope to the second-story landing, according to the New York Post, although no inmates attempted to escape.

Officers, seen sporting riot gear and gas masks, reportedly brought the situation under control using mace, but just moments later another window was broken on the other side of the building, which more inmates charged to and continued their chanting. 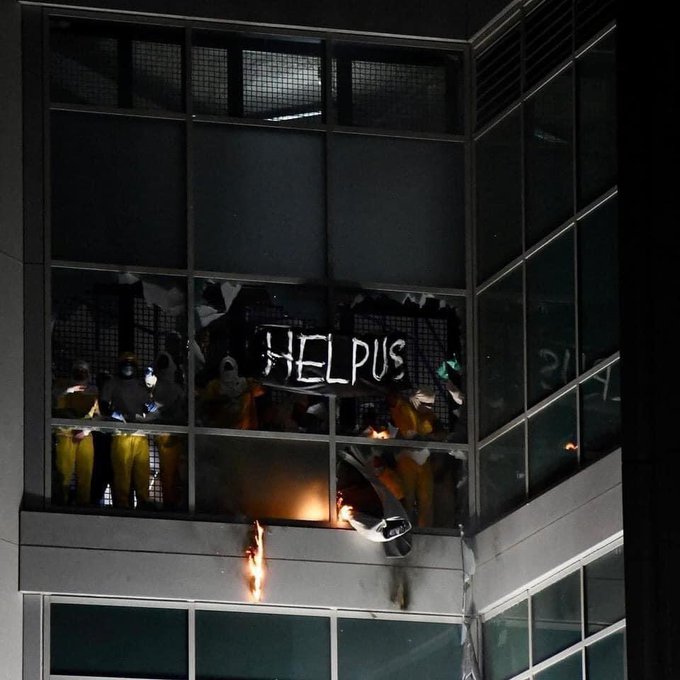 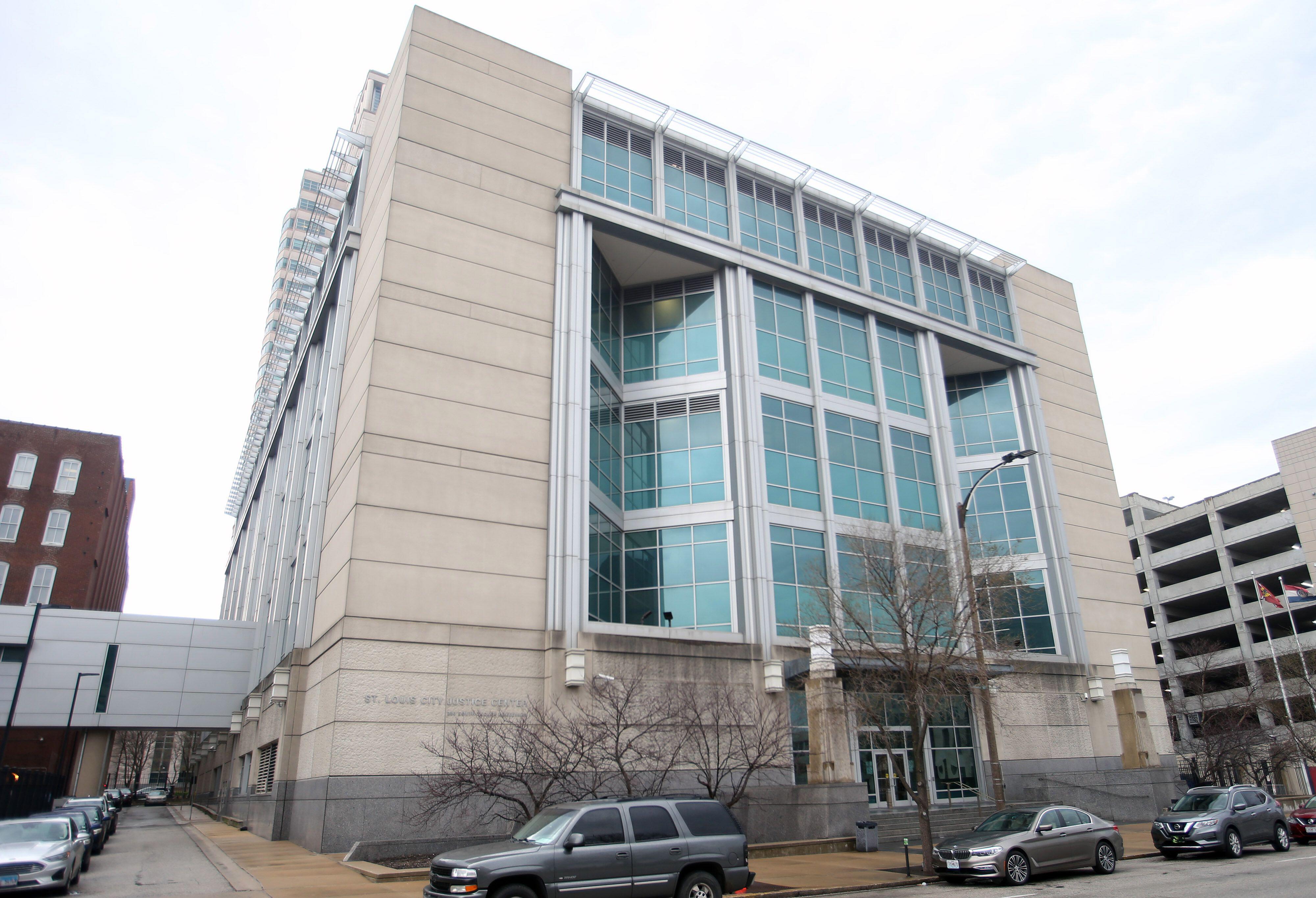 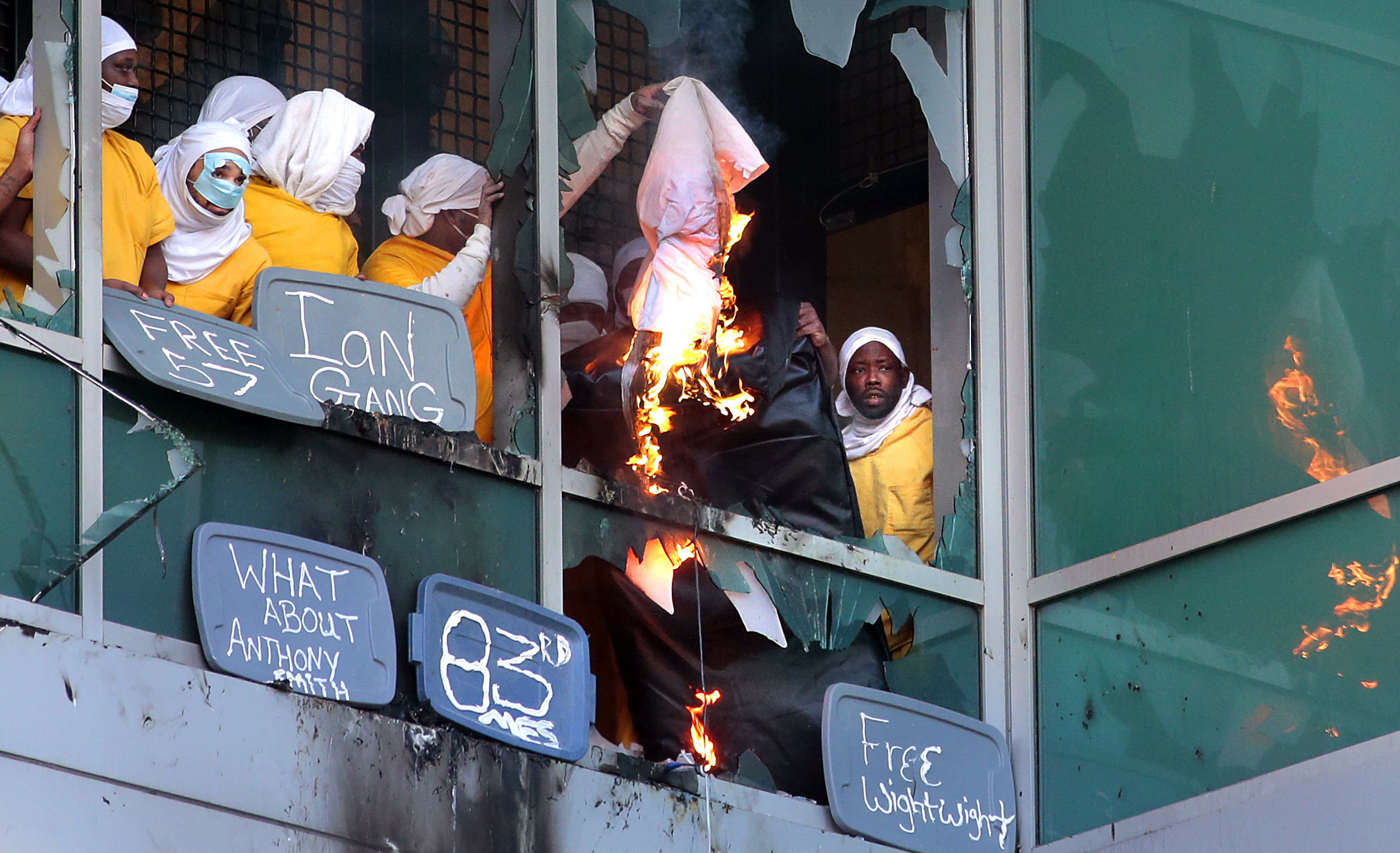 By around 11:30pm, the prisoners were again removed from the windows.

Officers later said the situation was under control, over an hour after the riot began.

The broken windows were boarded up at around midnight.

It is not clear if anyone was injured during the ruckus.

The inmates are believed to be revolting against unsafe covid conditions and the delay of court dates due to the pandemic.

On average, city inmates can spend up to a year awaiting trial.

Jacob Long, spokesman for St. Louis mayor Lyda Krewson, said in a statement this morning there were: "two violent and dangerous disturbances" at the jail that began at around 8:30pm.

It is the third explosive protest from inside the prison since December last year.

The most recent rampage follows an uprising on February 6 when more than 100 prisoners broke free from their cells and embarked on a kindred scheme of destruction.

The seven-hour disturbance, which was also prompted by complaints of terrible treatment throughout the pandemic, came to a similar fate and saw a task force be appointed to investigate the issues at the St Louis jail.

Chairman Rev. Darryl Gray released a report last month pleading with the city to create an independent oversight board to continuously help oversee the prison.

The six-story "state of the art" City Justice Center has the capacity to hold 860 inmates and opened in 2002. 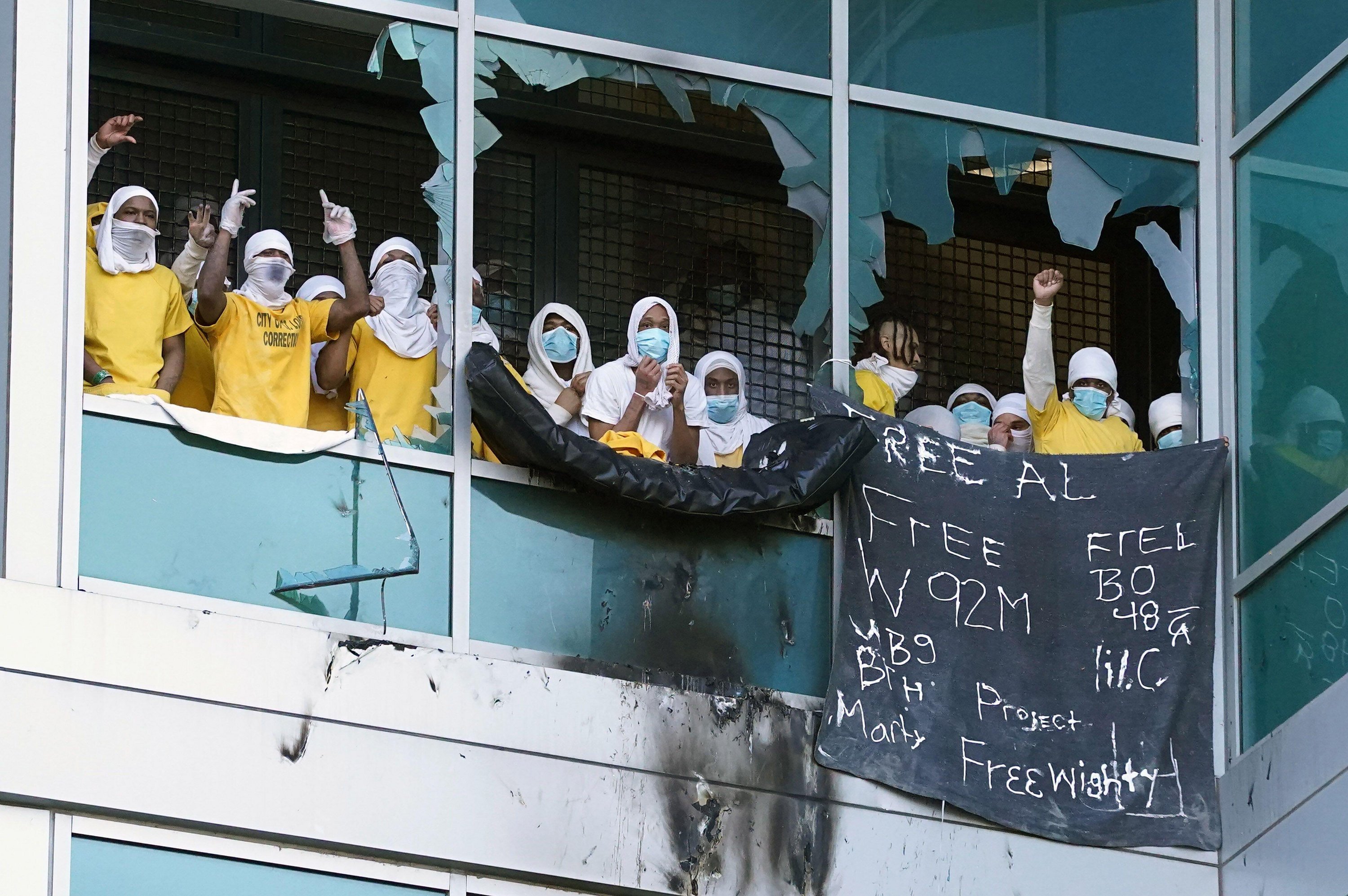