An NHS hospital in a Somerset seaside hotspot was forced to stop taking new patients due to ‘a high number’ of coronavirus cases following VE Day, a doctor has claimed.

Weston General Hospital, Weston-super-Mare, dramatically announced that it could not take any more admissions, including into A&E, yesterday morning.

Experts have said socialising on the anniversary of VE Day was responsible for an influx of Covid cases – and warned that more hospitals could follow if the country does not heed official instructions to stay indoors.

Dr Bharat Pankhania, a lecturer in public health medicine at the University of Exeter, told The Sun: ‘They have got too many cases and it is unfortunate as it reflects what was going on two or three weeks ago.

‘It is activities like VE Day where people drop their guard that have led to new infections.

‘If people start to drop their guard they will get infected and it will lead to a rise in the transmission of new infections.’

It is also thought that Britons enjoying the beaches amid hot weather was a factor in the spike in admissions. 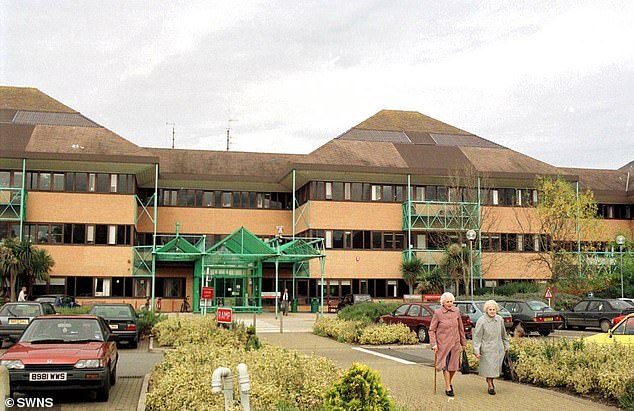 Weston General Hospital in Weston-super-Mare, Somerset, has stopped taking new patients due to ‘a high number’ already there with coronavirus 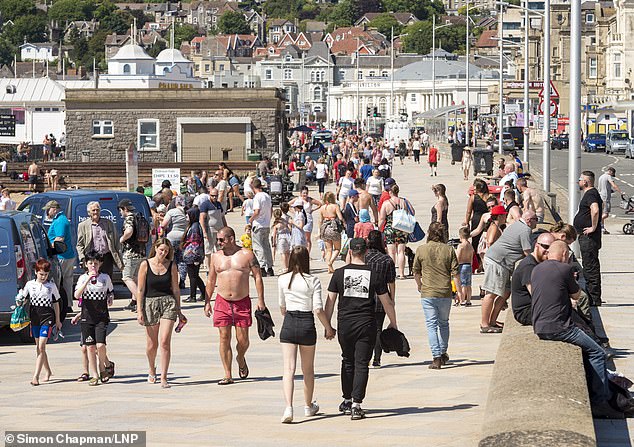 Social media users were quick to speculate the South West will see a surge in cases as a result of the Government loosening lockdown. Pictured: Weston-super-Mare promenade on May 20 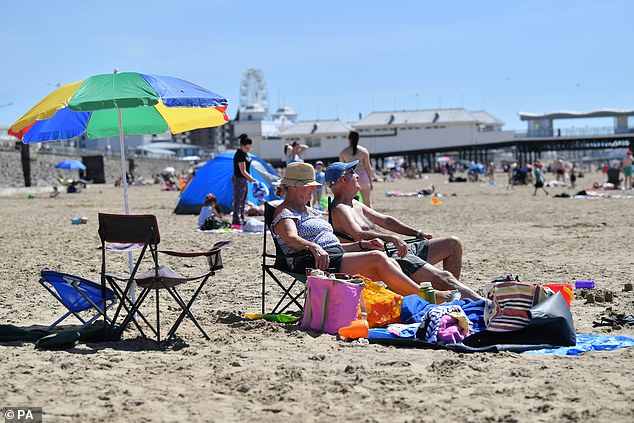 Day-trippers headed to Somerset beaches after Prime Minister Boris Johnson allowed the public to travel to other parts of the country for unlimited exercise and sunbathing. Pictured: Sunbathers on Weston-super-Mare beach 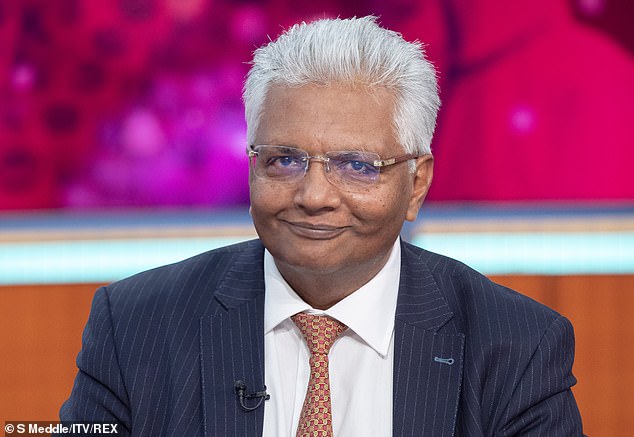 Dr Bharat Pankhania, a lecturer in public health medicine at the University of Exeter, said: ‘It is activities like VE Day where people drop their guard that have led to new infections’

Health chiefs have warned that all hospitals have ‘frequent’ changes in admissions. But questions were asked over whether the blame may lie on crowds who have flocked to the town to enjoy the sun since lockdown was slightly eased.

Thousands of people travelled to the South West and other coastal areas as soon as the government allowed nationwide travel again on May 13.

Weston-super-Mare’s mayor even admitted ‘you can’t rule it out’, when questioned if scores of Britons on the beach were to blame for the surge in cases. Furious Brits warned VE day celebrations on the beach on May 8 were ‘coming home to roost’, and one warned a second wave ‘rolling’ into the South West.

It is not the first time hospitals have been overwhelmed amid the coronavirus crisis, which began to spiral out of control in mid-March.

One NHS hospital in London was forced to declare a ‘critical incident’ early on in the crisis, after running out of intensive care beds. Other hospitals in the capital have allegedly had to turn away coronavirus patients because they were running out of beds, according to staff. 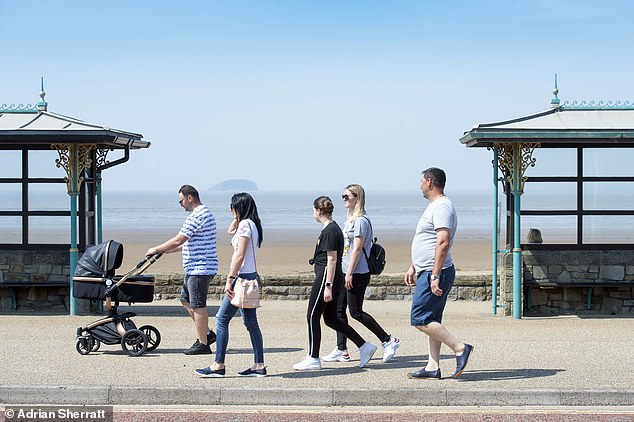 A family are pictured walking down Marine Parade together in Weston-super-Mare on May 9, the day after VE day 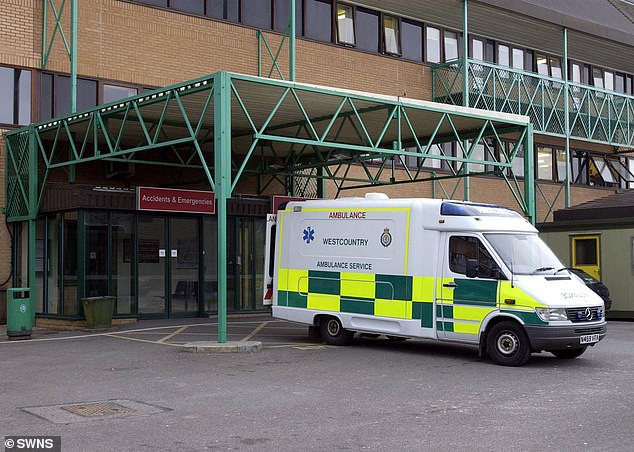 Sun-worshippers carried on descending on parks and beaches today, amid an expected 79F heatwave, in rebellion against the Government defending the actions of a senior aide breaking lockdown rules.

The Prime Minister has said Dominic Cummings would not be sacked over 260-mile trip he took from London to his parents’ home in Durham while he and his wife were self-isolating with coronavirus symptoms, prompting a furious reaction from Britons who have been making huge sacrifices to abide by the restrictions.

NHS figures show the number of patients in hospitals with Covid-19 has reduced as a result of Britain’s lockdown – admissions have dropped 11 per cent in a week.

WHY DOES THE SOUTH WEST HAVE SO FEW DEATHS?

The South West, which includes Cornwall, Devon, Dorset and Somerset, has had the fewest COVID-19 deaths in England (1,157).

This will be for a number of reasons including those based on the region’s geographical demographics, such as the fact it is largely rural – with the  second-highest proportion of rural population in the UK – and less densely populated than other parts of England.

Population density plays a significant role in infection rate, and therefore deaths. London has had 26,780 confirmed COVID-19 cases compared to the South West’s 7,524.

Data released by the Office for National Statistics on 1 May found the fatality rate of COVID-19 is six times higher among those living in major cities than in rural areas. No rural area of England and Wales had a death rate higher than 21.9 at the time of the study.

The ethnicity, and income of wealthy and predominantly white South West citizens may partially explain the lower infections and deaths. The region has some of the lowest unemployment rates and highest rates of house ownership without debt, 2011 figures show.

The ONS study shows that once you take the age of population into account, the rate of deaths involving COVID-19 is roughly twice as high in the most deprived areas of England and Wales as in the least deprived.

Those living in poverty smoke and drink alcohol more and are more likely to be obese – all of which increase the likelihood of chronic health conditions.

They are more likely to have key worker jobs such as in a supermarket, public transport, or in hospitals, which means they are more at risk of exposure to the virus than someone who is able to work from home.

This affects how different locations are impacted by COVID-19. For example, in Newham and Brent, London boroughs with high mortality rates, ethnic minority groups make up the majority of residents in – 71 per cent 64 per cent respectively.

Members of ethnic minority communities are twice as likely to be affected by poverty, and are often hit the hardest by chronic diseases.

At the 2011 ONS census, the proportion of white people in the South West region was 95.4 per cent, meaning less than five per cent of people there are from an ethnic background.

The South West – which also covers the tourist-hotspots of Devon and Cornwall – has suffered the fewest deaths (1,157) and cases (7,524) during the pandemic.

There have been 114 deaths at University Hospitals Bristol and three at Weston NHS Foundation Trust – which run Weston General Hospital.

The trust said patients will not be accepted from 8am today.

It said there are arrangements in place for new patients to access treatment and care ‘in other appropriate healthcare settings in the area should they need it’.

Dr William Oldfield, medical director at the trust, said: ‘As with any hospital, the number of patients with Covid-19 will frequently change as people are admitted and discharged.

‘We currently have a high number of patients with Covid-19 in Weston General Hospital.

‘Whilst the vast majority will have come into the hospital with Covid-19, as an extra precaution we have taken the proactive step to temporarily stop accepting new patients to maintain patient and staff safety.’

Weston General Hospital is in North Somerset, which has so far had 406 positive COVID-19 test results, according to Public Health England.

It’s fewer than next door Bristol City, with 694 cases, Wiltshire with 523 and the rest of Somerset with 669.

Suspicion of a surge of coronavirus patients in the South West region due to the recent easing in lockdown measures was rife on social media today.

The public are skeptical that VE day street parties three weeks ago may have driven cases up. Typically it would take around 20 days between a person being infected and them needing hospital care.

Others speculate Prime Minister Boris Johnson’s recent loosening of the lockdown, allowing unlimited exercise and sunbathing from May 11, may have led to a wave of new infections in the South West – or could do in the future.

Thousands of people in England flocked to the South West and other coastal areas as soon as they were told they could travel to other parts of the country.

Day-trippers headed to Somerset beaches, including Weston-super-Mare. There was no evidence anyone broke lockdown rules.

But numerous local authorities across the South West urged people not to drive to beaches and beauty spots in fear that large crowds would increase the risk of spreading coronavirus.

Mark Canniford, Lib Dem mayor of Weston and member of North Somerset Council, criticised the ‘total disregard’ for the town’s residents from day-trippers.

Speaking to The Independent, Mr Canniford said he did not think there was a link between the crowds on the beach and the closure of Weston General Hospital today.

He said it was ‘unlikely’ and ‘too soon’ for any cases to have shown up. But he admitted ‘you can’t rule it out’.

‘We have been behind the curve on the virus so we could just be catching up,’ he said. 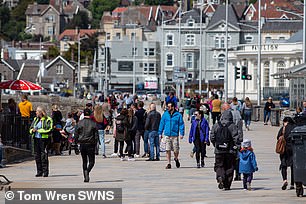 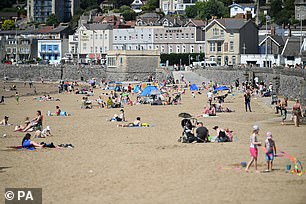 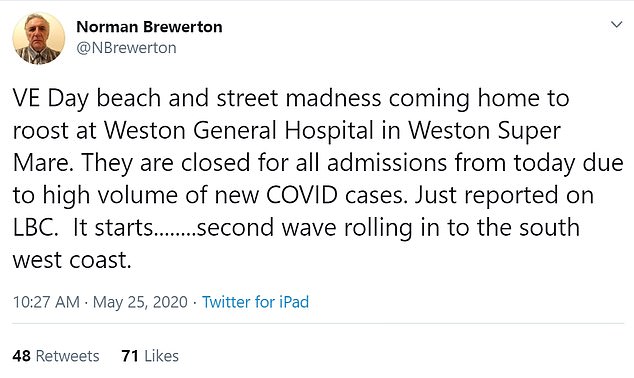 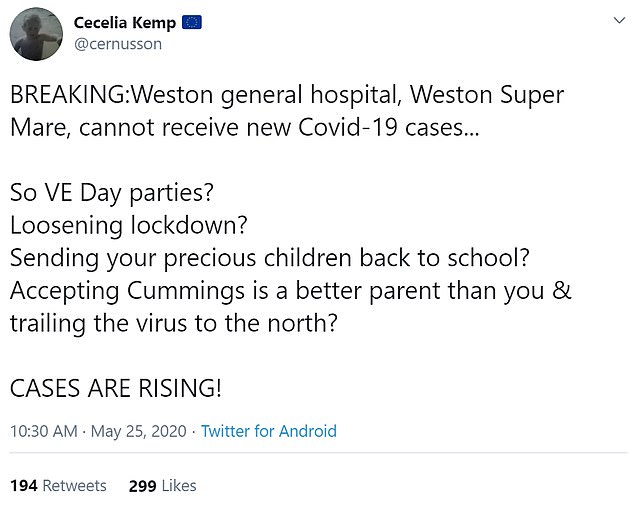 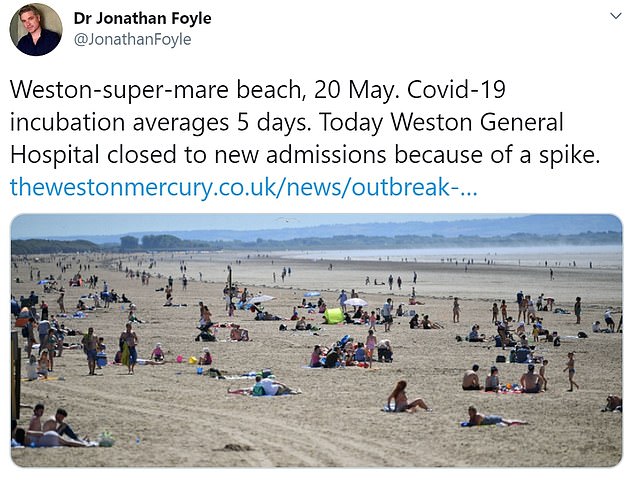 ‘The people you see roaming about don’t tend to live here. People should not be roaming around. It’s not fair to the communities they are roaming to. People seem to think they don’t have symptoms so they’re ok but it’s not.’

There are currently 8,951 people in hospital with COVID-19 across UK hospitals, with admissions slowing in the past few weeks after the peak of the crisis in mid-April.

Some areas have recovered quicker than others, graphs show. London has seen a more drastic decline in hospital patients than the South West and East of England.

Dr Oldfield suggested it was normal for hospitals to see changes in the number of COVID-19 admissions.

But only one other hospital has had to respond to the crisis with drastic measures – and that was in London back in March. 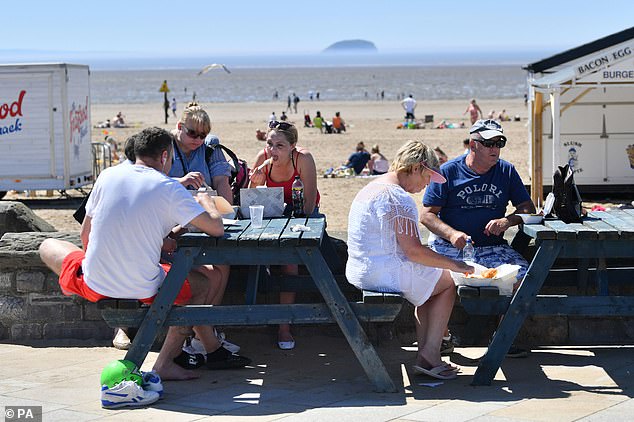 Sunbathers enjoy the hot weather at Weston-super-Mare and groups gather for fish and chips, May 20 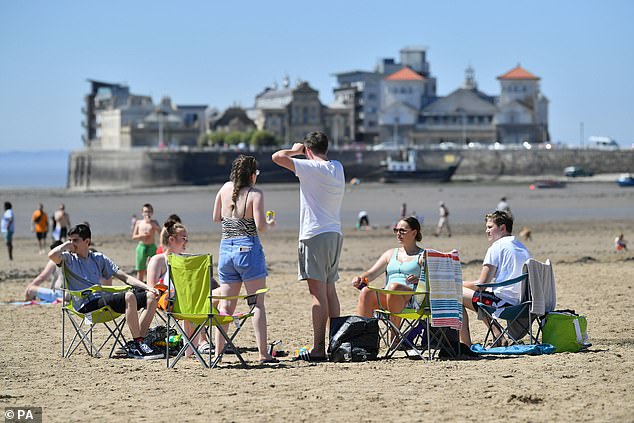 Weston General Hospital is in North Somerset, which has so far had 406 positive COVID-19 test results. Pictured: People on Weston-super-Mare beach on May 20 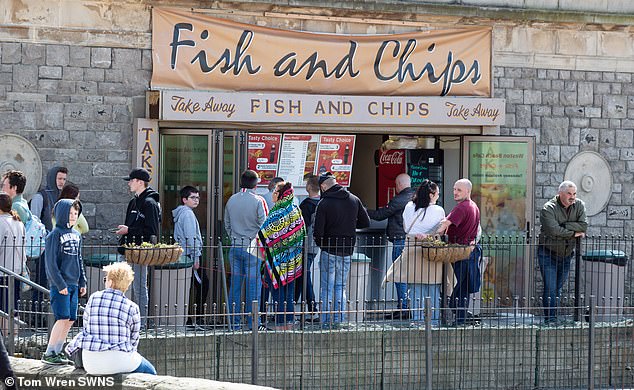 Mark Canniford, Lib Dem mayor of Weston and member of North Somerset Council, said he thought it was ‘too soon’ for the loosening of lockdown to be showing new cases of coronavirus, but admitted it couldn’t be ruled out 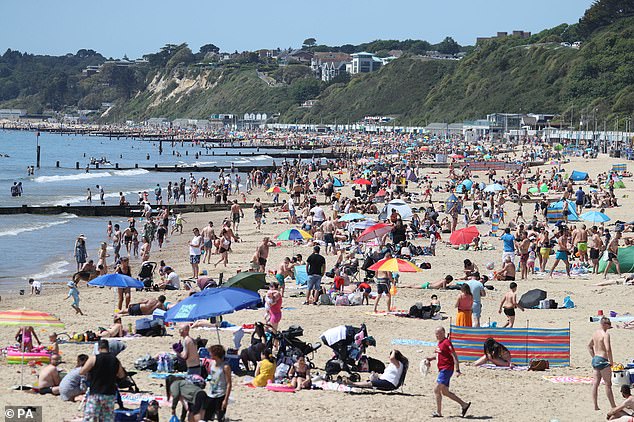 Sun-worshippers carried on descending on parks and beaches today, amid an expected 79F heatwave, in rebellion against the Government defending the actions of a senior aide breaking lockdown rules. Pictured: Thousands of people rushed to Bournemouth beach in Dorset today 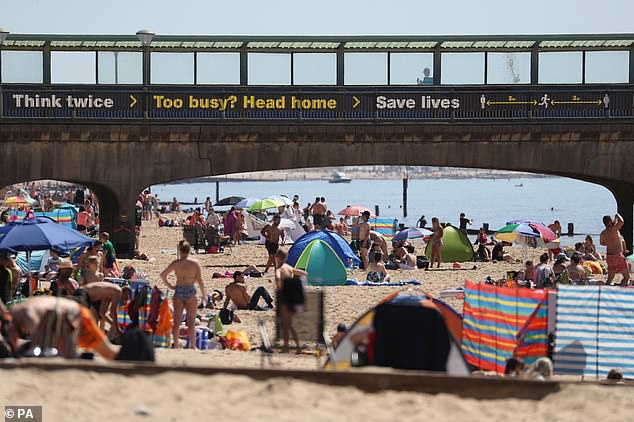 Northwick Park Hospital, in Harrow, north-west London, declared a ‘Critical Incident status’ because there was not enough space for patients requiring critical care.

Queen Elizabeth Hospital and University Hospital Lewisham, which are run by the same trust on the south-east side of the city, were also unable to admit all critically ill patients to intensive care at the time, the HSJ journal reported.

Dr Oldfield said the situation at Weston General Hospital was ‘under constant review’.

He said: ‘This is a clinically led decision and we are being supported by our system partners to ensure that new patients receive the care and treatment they need in the appropriate setting, and we are continuing to provide high-quality care to existing patients who are being treated in the hospital.

‘We have a robust coronavirus testing programme in place for patients and staff to identify cases quickly, with appropriate measures taken by clinical teams as required.’ 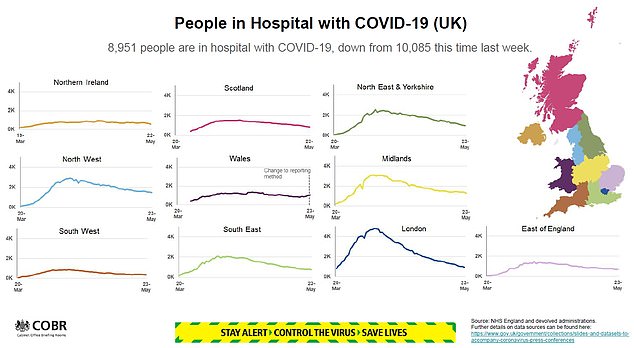 The number of patients in hospitals with COVID-19 has been steadily dropping, reducing by 11 per cent in the past week 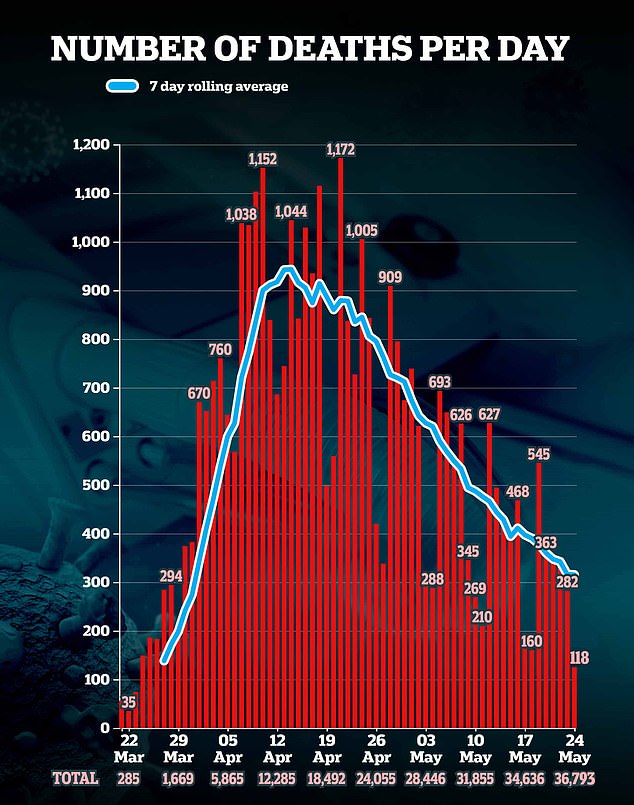