As United Nations Secretary-General Antonio Guterres seems all but set to win a second term in office it seems that his much-vaunted whistleblower protection program is not all it seems to be. At least according to one whistleblower who says the U.N. wants to revoke her status.

Emma Reilly a lawyer at the U.N. Office of the High Commissioner for Human Rights (OHCHR) who was granted whistleblower protection by Guterres in 2020 tells Fox News that the U.N. is looking to find a way to rescind it.

Reilly alerted her bosses when she learned her office – on the request of China – handed over names of dissidents who were coming to the U.N. Human Rights Council (UNHRC) in Switzerland. Reilly said this resulted in pressure from Beijing on the dissidents not to make the trip. She said that included pressuring their families which in some cases resulted in arrests, torture and in one case a person was reported to have died in detention.

“I am collateral damage, and senior managers are now apparently so utterly devoid of ethics that they genuinely do not understand why I would prioritize the lives of human beings over my pay and benefits,” Reilly told Fox News.

The attorney said that the U.N. “denied” she was a whistleblower and claimed, “that no reasonable person could ever think a secret policy of giving names of human rights advocates to China, and only to China, was a problem.”

However, she said it was an ethics officer at the organization, “on the verge of retirement [that] finally displayed actual ethics.” The officer looked into the case and “found that managers of the U.N. Human Rights Office were concerned only with giving China what it wanted” while Reilly says she “actually cared about human rights.” 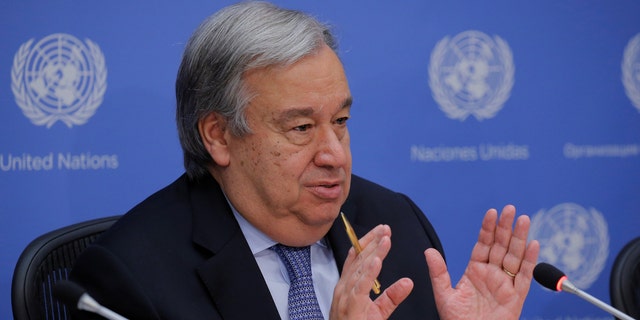 Fox News contacted the alternate chair of the U.N. ethics panel but was told to direct inquiries to the secretary-general’s spokesman.

Stephane Dujarric a spokesman for Guterres wrote in an email statement to Fox News that, “At this point, all I can tell you is that the questions you raised relate to a matter that is currently under internal review in accordance with the procedures set out in ST/SGB/2017/2/Rev.1 (Protection against retaliation for reporting misconduct and for cooperating with duly authorized audits or investigations). As this remains an internal matter, we have no further comment at this time.”

A Fox News follow-up email asking if Reilly’s whistleblower status had been withdrawn has so far not been answered.

Edward Flaherty an American lawyer who has represented whistleblowers throughout the U.N. system based in Geneva, Switzerland, told Fox News that “the egregious,” about-face in Reilly’s case is a final nail in nail the coffin of the claim that the U.N. provides whistleblower protection.

“The recently announced decision of the U.N. Ethics Office to revoke a prior positive finding made by a now-retired official in the retaliation case of U.N. whistleblower Emma Reilly seems to suggest a rearguard action has been initiated by senior U.N. officials,” according to Flaherty.

The attorney added, “‘The recently announced decision of the UN  Ethics Office to revoke a prior positive finding made by a now retired official in the retaliation case of UN whistleblower Emma Reilly seems to suggest a rearguard action has been initiated by senior UN officials (with or without the knowledge of SG Guterres who originally granted protection against retaliation to Ms. Reilly, now that he has secured his coveted second term) to strip away such protection to enable the UN to fire her for ‘breach of confidentiality’ – the fate of most UN whistleblowers sooner or later!!”

Flaherty called on Congress to act by lifting the global organization’s immunity and funding. “Every U.S. administration makes the right noises about whistleblower protection, but the U.N. still can’t point to a single public interest whistleblower who survived the system and was not eventually crushed. It’s time for Congress to take concrete action once and for all to protect whistleblowers.”

At a press conference last July, Guterres was asked about Reilly’s case and defended the U.N. whistleblower policy.

In Reilly’s case, he told Fox News that, “In relation to that question there was an investigation that was recently finished, and we are now moving ahead with the conclusions of the investigation. But one thing is an individual case in which we can have different opinions about this or that. The other thing is a policy in which I am adamant that all those that do their job, their obligation as whistleblowers, are effectively protected.” Shortly after that Reilly was given whistleblower status.

Meanwhile, Reilly tells Fox News she remains resolute despite all she has faced in just wanting to tell the truth.

“I am not even permitted to report for work and the U.N. refuses to even pretend to give a reason. The retaliation is blatant and intended to send a message to all U.N. staff — China is the new boss, and no U.N. staffer should ever report breaking the rules to please Beijing.”