The NSW doctor who helped expose disgraced surgeon Emil Gayed has broken down in tears while revealing he was yelled at by hospital administrators because he wanted a proper investigation into the preventable death of one of Mr Gayed’s patients.

Dr Nigel Roberts’ testimony to a parliamentary inquiry on Wednesday bore disturbing similarities to earlier claims about the cover up of avoidable deaths in other regional NSW hospitals, including at Orange and Broken Hill. 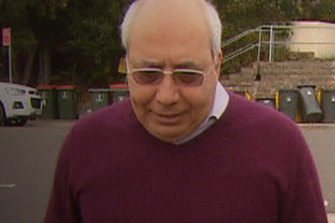 Former gynaecologist Emil Gayed has been banned after a review into his conduct. Credit:Nine News

Dr Roberts expressed frustration at what he perceived as a failure to address the underlying factors that allowed Mr Gayed to practice unchecked in regional NSW hospitals for 16 years.

Dr Roberts said health administrators had told him the matter was closed and they would not be responding to his emails any more.

He said the surviving patients, some of whom have grievous injuries, were still being highlighted as a potential future “legal issue” for the health district.

“And for me it’s not a legal issue, it’s a medical issue. I want these women to be well and I want us to put in the steps to stop it happening again – even though it’s painful, even though it’s hard,” Dr Roberts said. 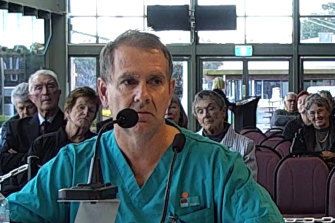 Dr Roberts raised the alarm about Mr Gayed’s conduct after being appointed the director of obstetrics and gynaecology at Taree’s Manning Base Hospital in 2015.

However, it was already too late for dozens of women alleged to have been inappropriately treated by the now-banned gynaecologist across Grafton, Cooma, Kempsey District, Mona Vale and Manning hospitals.

An independent review commissioned by NSW Health found “repeated themes” of the unnecessary removal or perforation of organs and unnecessary or wrong procedures being performed on patients.

During the inquiry into regional health on Wednesday, Dr Roberts said one patient had the lining of her uterus burnt by Mr Gayed, which should not have occurred because she had precancerous cells.

“You don’t do this [procedure] if a person has a precancerous condition,” Dr Roberts said.

The patient died a few weeks later, he recalled.

Dr Roberts classified the incident as SAC1, the most serious event that can happen in a hospital, requiring a full investigation and the Ministry of Health to be notified.

“I’m horrified by this,” he said. “She’s dead and she needn’t be dead – if she had the correct operation she’d be alive.”

Dr Roberts was stunned when governance officials later reclassified the incident as an SAC3 incident.

These incidents only involve “minor harm” to a patient, with no need to notify the ministry unless there is potential media interest.

Labor MLC Walt Secord queried Dr Roberts about who made that decision.

“Someone in governance,” Dr Roberts said. “I don’t want to bring in third parties.”

He said he got into strife with the administrators because he discussed the decision with his colleagues.

“To see, am I insane? Is this not one of the most serious things you’ve ever heard?” Dr Roberts recalled of the conversations with his colleagues.

“And people from governance are yelling at me down the phone, saying how dare you question this, why are you asking other people?”

Dr Roberts became emotional and struggled to continue with his evidence when Mr Secord asked if he was being supported by anyone over the matters.

“People from Hunter New England executive have made it clear that this matter is over and they don’t want to talk about it any more.”

Dr Roberts blamed the failure to uncover Mr Gayed’s performance issues on a heavy reliance on visiting medical officers at Manning Base.

“I believe it was because there was no one in a role with the proper level of expertise who could judge what he was doing,” he said.

“You need someone with the time and expertise to look into the complications and see if there’s a common thread.”

The inquiry is examining the state of rural and regional healthcare after the Herald highlighted a series of deaths and near-misses at hospitals in western NSW.

It has previously heard similar allegations about the inappropriate downgrading of such incidents.

One of them was the death of teenager Alex Braes, who died from septic shock after being sent home three times from Broken Hill Hospital with an infected toe nail.

At the time a spokesperson for NSW Health said it promotes a just culture, where staff are encouraged to report problems openly and honestly, and learn from mistakes.

The spokesperson said it had a new incident management system that provided objective scoring to all clinical incidents notified by staff.

Hunter New England Health District has been contacted for comment.