A widow’s poignant journey to bury some of her late husband’s ashes and their wedding rings was ruined after an airline left her suitcase behind.

Joyce Jackson, from Abergele, north Wales, planned to fly to Florida at the beginning of the month to leave the momentos at their favourite holiday spot – Walt Disney World in Orlando.

But she claims Virgin Atlantic accidentally left her suitcase – containing the rings and some of her husband’s ashes – at Manchester Airport.

Mrs Jackson believes it was because the airline’s own ‘flimsy’ tag, which loops around a luggage handle, came off. 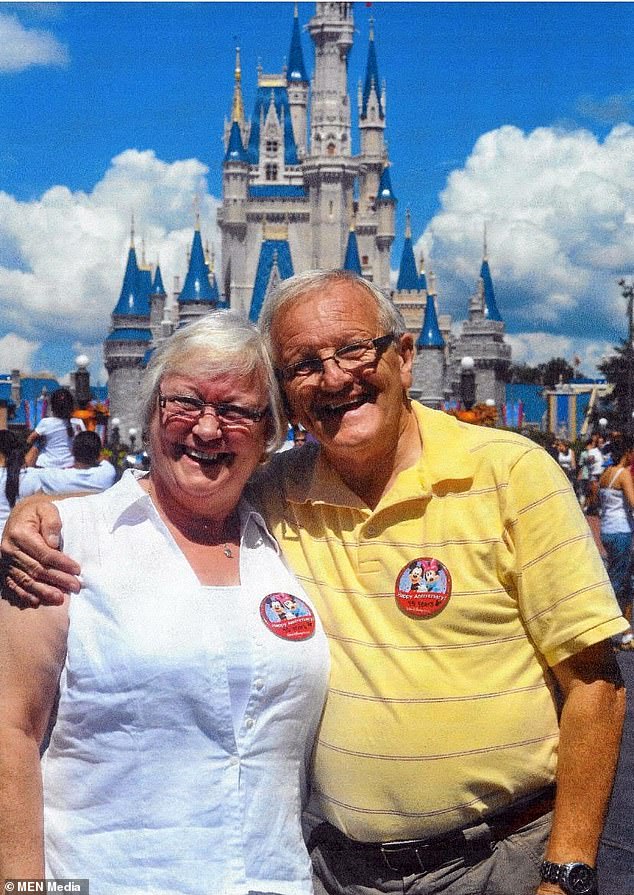 Joyce Jackson planned to fly to Florida at the beginning of the month to leave the momentos at their favourite holiday spot. Pictured: Joyce and late husband Gordon at Walt Disney World in Florida for their Golden Wedding anniversary in 2014

Mrs Jackson, whose husband Gordon died aged 78 after a tragic accident, had planned the US trip in his memory.

The idea was to go near to what would have been his 80th birthday and their wedding anniversary.

She had intended to bury the treasured items in a special place where they had visited three times together – the garden at the Caribbean Beach Resort at Walt Disney World in Orlando,

The widow, also 78, told North Wales Live: ‘Gordon absolutely loved it there. He would talk to the characters. It wasn’t a pilgrimage but I wanted to bury some of his ashes and our wedding rings there.

‘But it was as if Virgin Atlantic didn’t care.’

Even though she had no suitcase – with its precious cargo – to collect at the Orlando airport, Mrs Jackson was determined to enjoy her trip. She said: ‘Gordon would have said: “Good on you.”‘

Mrs Jackson travelled to Manchester Airport to fly to Orlando on October 4 with some of Gordon’s ashes in a single, grey suitcase.

The main consignment of ashes remains at her Abergele home. 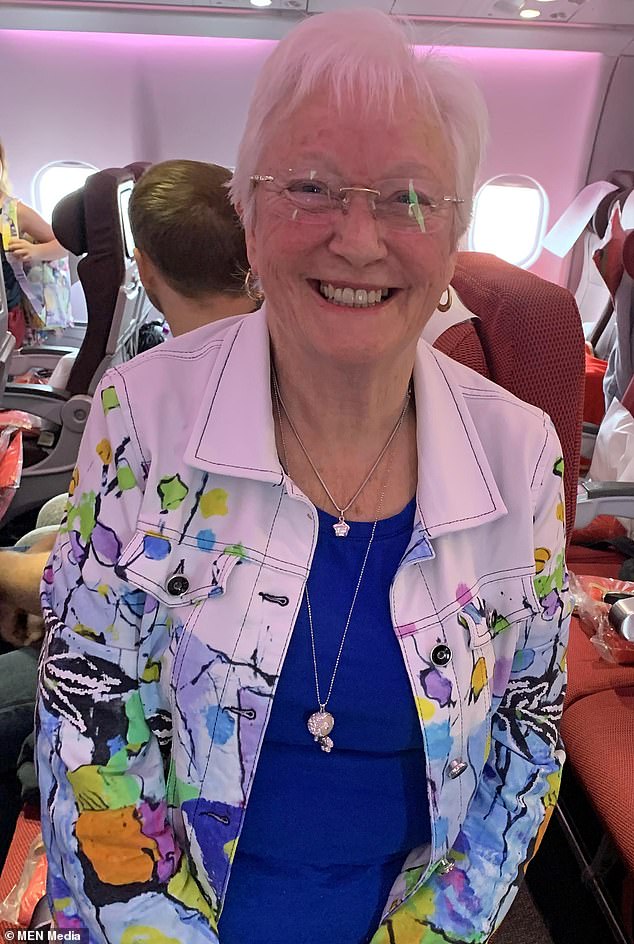 Mrs Jackson, whose husband Gordon died aged 78 after a tragic accident, had planned the US trip in his memory

‘At Manchester Airport I was told I had to use the self-service bag drop. I did that and got a luggage label. A man put it on. It wasn’t a sticky label where you loop it round a handle and stick both ends together. It was more like a paper one. But it must have come off.

‘I got to Orlando, and no luggage. I travel light and I only had what I was wearing – not even a toothbrush.

‘But the worst thing about it was the ashes and rings were in the suitcase. I know you can’t take a person’s ashes with you so I only had a few ashes and our wedding rings.

‘I was going to bury them in a garden at Caribbean Beach Resort. The main ashes are in a rose pot in our garden.’

Mrs Jackson has complained to Virgin Atlantic and told them that there were sentimental items in the case.

She added that once staff at Walt Disney World learned what had happened they were helpful.

But Mrs Jackson said: ‘I had to wash my underwear every night with shower gel. But Disney were very good, considering it was not their problem. 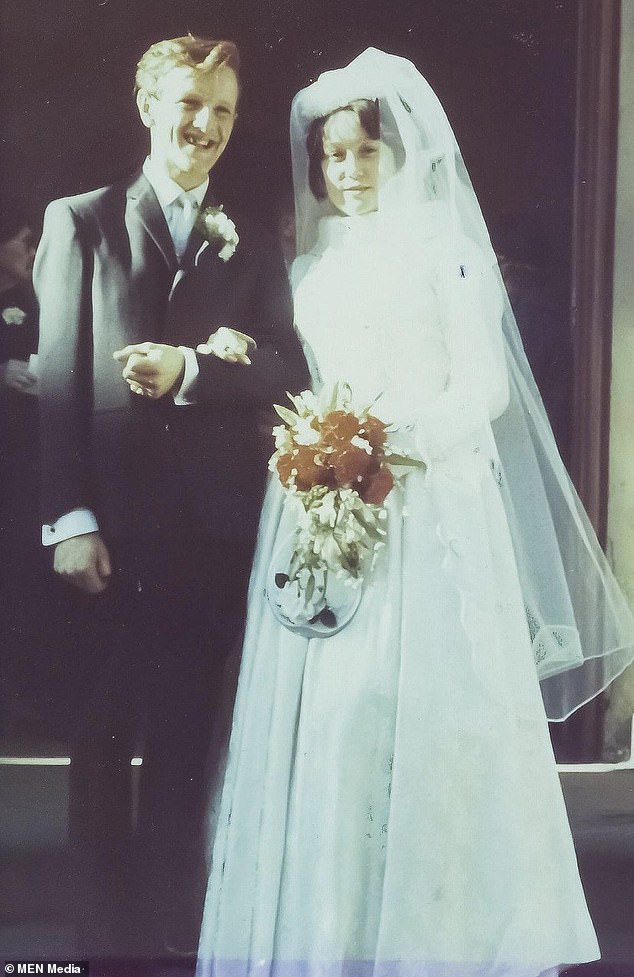 Married for 57 years, Joyce and Gordon had tied the knot at St John’s Baptist Church in Sussex Street, Rhyl, on September 26, 1964

‘They gave me a toothbrush and arranged for a taxi to take me to a supermarket so I could buy hairspray and toothpaste. I also bought three dresses, a T-shirt and a bag.

‘But I don’t need these clothes back here – they’re summer dresses.’

Mrs Jackson estimates she spent about £700 extra on clothes and toiletries to replace those in her lost suitcase.

She says it was only located when a duty manager in Orlando traced it to Manchester Airport – where it had been all along. Mrs Jackson flew home on October 13 and has now been reunited with her luggage.

The widow believes it was the last chance to bury those few ashes and sentimental rings. She said: ‘I can’t go back because I can’t afford it and I’m 78.’

However, Mrs Jackson said she was determined to make the most of her trip, despite the luggage setback.

‘I couldn’t stay in a hotel room. I did go out every day. I had to enjoy it.. I went on the boats and the cable cars – I went to the places that we loved. It was not a pilgrimage. It was not sad until they lost the suitcase.’ 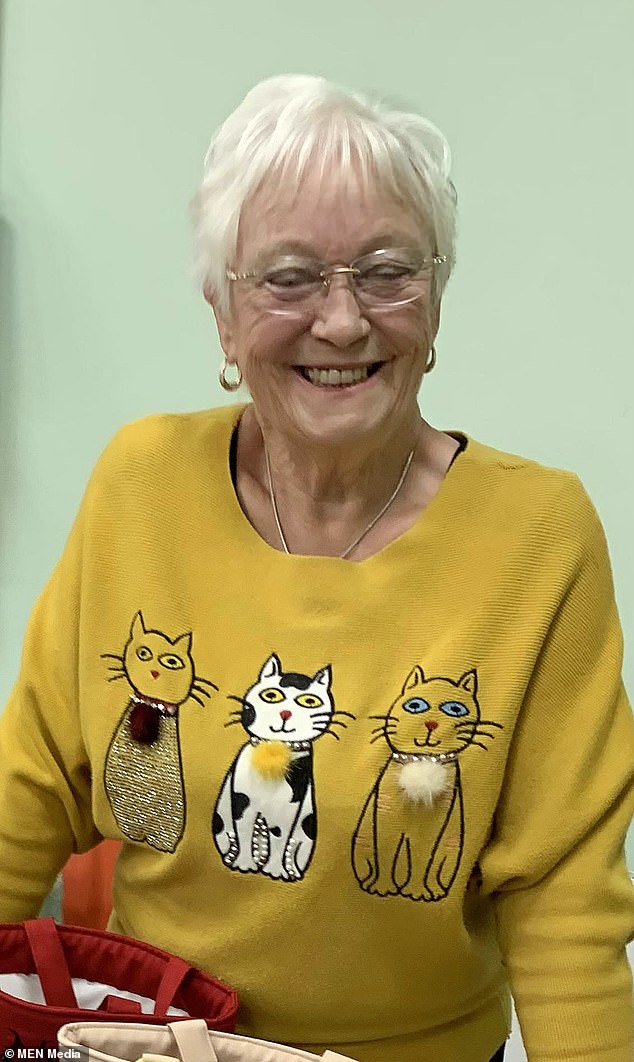 Married for 57 years, Joyce and Gordon had tied the knot at St John’s Baptist Church in Sussex Street, Rhyl, on September 26, 1964.

He was a vocalist and rhythm guitarist in the band Brian Sharpe and the Senators and later a vocalist and bassist in his own band Mr Blue in the Eighties.

Joyce owned JJ’s Bridal Veils shop in Kinmel Bay and Gordon was a council joiner. Later he worked in sales at the shop until they left in 2009. Their daughter Tracey runs it now.

But tragedy struck last year when Mr Jackson had an accident and died on June 3, 2021.

Mrs Jackson said: ‘We had been on a long walk in Pentre Park in Abergele. We got into town and Gordon wasn’t feeling well. He held onto a lamppost.

‘I turned my head away and he passed out and fell backwards into the road. He got a fractured skull and did not regain consciousness.’

North Wales Live contacted Manchester Airport which referred callers to the Virgin Atlantic airline which deals with checked baggage as part of its service. Virgin Atlantic has been asked to comment.