EXCLUSIVE: William and Harry JOIN FORCES in rare show of unity for charity remembering their tragic friend ‘Henners’: Princes BOTH sign tribute to Henry van Straubenzee – for carol concert on the same day the Sussexes dropped their Netflix show trailer

Princes William and Harry joined forces in a rare show of unity for charity to remember their late friend Henry van Straubenzee – just as the Sussexes dropped their new Netflix trailer.

A joint letter, penned for a carol concert for the Henry van Straubenzee Memorial Fund at St Luke’s Church, Chelsea on December 1, featured both brothers’ names.

It went on to pay tribute to ‘Henners’, using ‘we’ and ‘us’ as the Royals presented a unified voice. It is understood to be the first time in at least a year they have put out a statement together.

Coincidentally it fell on the same day Harry and Meghan released the first trailer for their Netflix documentary, which has been branded in some quarters as a ‘declaration of war’. 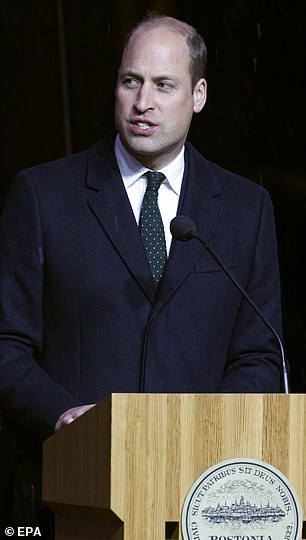 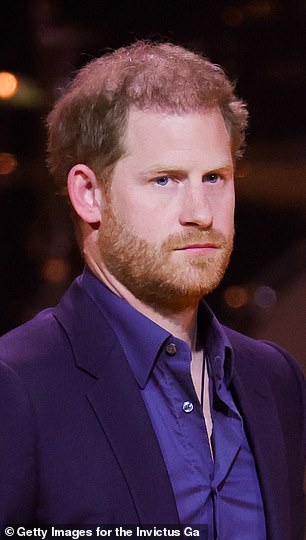 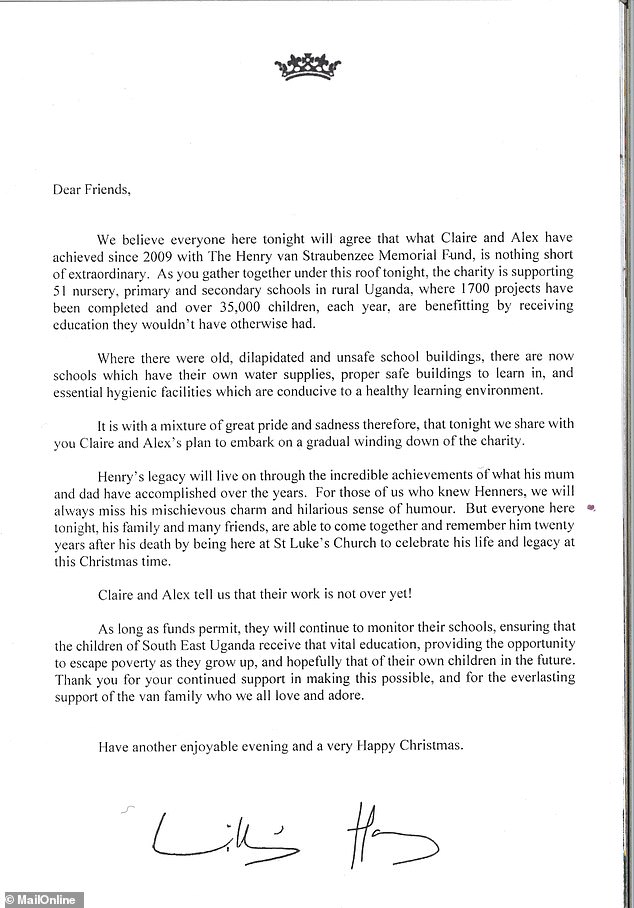 The promotional trailer, posted online on the second day of the Prince and Princess of Wales’ high-profile visit to the US, dispelled any hopes that the Sussexes are declaring a ceasefire in their acrimonious battle with the royal family.

It included voiceovers from Harry saying ‘no-one sees what’s happening behind closed doors’ alongside a picture of Meghan seemingly sobbing.

But the letter of tribute suggested a sense of unity between the brothers as they came together in a message for a special family close to their hearts.

The royal brothers are patrons of the charity – which was set up by Henry’s parents  Alex and Claire – and have been attendees along with their wives Kate Middleton and Meghan Markle at the festive event in previous years. 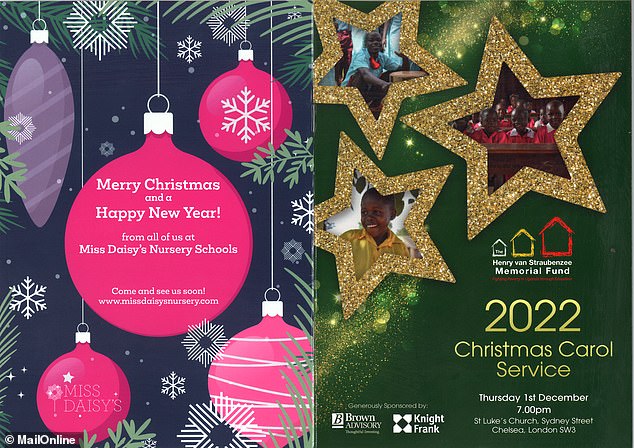 The letter was written by William and Harry for a carol concert for the Henry van Straubenzee Memorial Fund at St Luke’s Church, Chelsea, on December 1 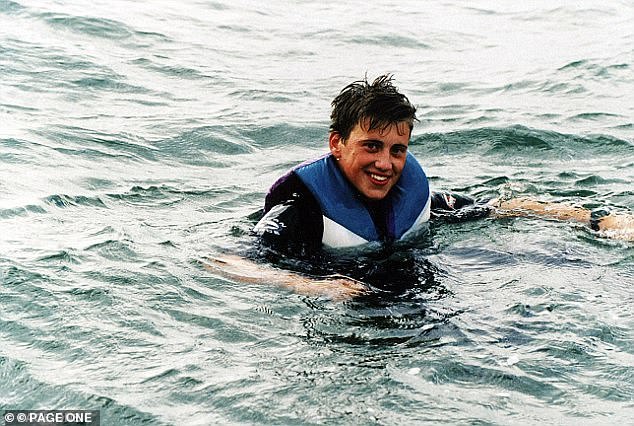 Henry died instantly when a car in which he was a passenger hit a tree outside Ludgrove preschool in Berkshire, where he and the princes were once pupils

A family friend to the two princes

Prince Harry once described Henry as a ‘Polzeath surfing legend and ladies’ man with whom we shared so many special memories’.

He died instantly when a car in which he was a passenger hit a tree outside Ludgrove preschool in Berkshire, where he and the princes were once pupils.

Henry was a classmate of Prince Harry’s, while his older brother Thomas was a friend of the Duke of Cambridge. The foursome were said to be inseparable as they were growing up.

Harry and William remain close friends with the two surviving van Straubenzee brothers, with both attending the wedding of Thomas van Straubenzee, 38, in 2013

The families have been friends for decades, with their uncle, William van Straubenzee, a close friend of their mother Princess Diana.

Younger brother Charlie, 32, is very close with Prince Harry and is godfather to his son Archie, one.

The heartfelt letter read: ‘We believe everyone here tonight will agree that what Claire and Alex have achieved since 2009 with The Henry van Straubenzee Memorial Fund, is nothing short of extraordinary.’

The charity supports schools and helps construct, restore and improve buildings, enabling children to have better and properly-equipped classrooms and facilities like restrooms.

‘As you gather together under this roof tonight, the charity is supporting 51 nursery, primary and secondary schools in rural Uganda, where 1700 projects have been completed and over 35,000 children, each year, are benefitting by receiving education they wouldn’t have otherwise,’ said the letter.

‘Where there were old, dilapidated and unsafe school buildings, there are now schools which have their own water supplies, proper safe buildings to learn in, and essential hygienic facilities which are conducive to a healthy learning environment.

‘It is with a mixture of great pride and sadness therefore, that tonight we share with you Claire and Alex’s plan to embark on a gradual winding down of the charity.

‘Henry’s legacy will live on through the incredible achievements of his mum and dad have accomplished over the years. For those of us who knew Henners, we will always miss his mischievous charm and hilarious sense of humour.

‘But everyone here tonight, his family and many friends, are able to come together and remember him twenty years after his death by being here at St Luke’s Church to celebrate his life and legacy at this Christmas time.’ 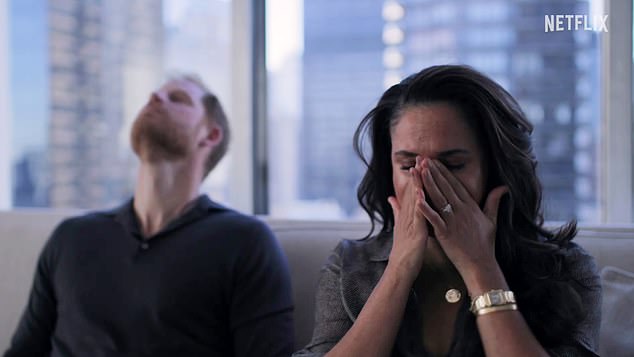 Harry and Meghan’s new Netflix documentary is being seen as a ‘declaration of war’ by the royals, sources have said 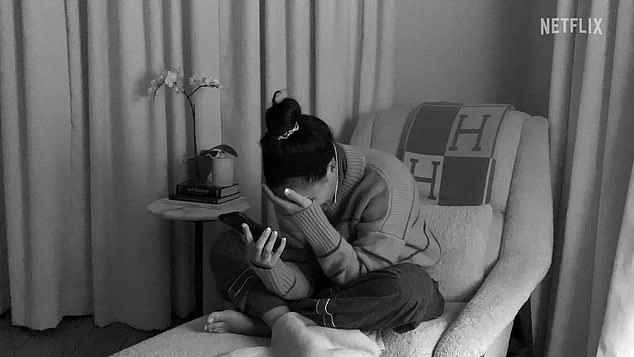 William and Harry’s jointly-signed letter was carried in the order of service at Thursday’s carol service attended by close friends – including Princess Kate’s sister and brother, Pippa and James, and their spouses.

The letter continued: ‘Claire and Alex tell us that their work is not over yet!

‘As long as funds permit, they will continue to monitor their schools, ensuring that the children of South East Uganda receive that vital education, providing the opportunity to escape poverty as they grow up, and hopefully that of their own children in the future.’

It concluded: ‘Thank you for all your continued support in making this possible, and for the everlasting support of the van family who we all love and adore. 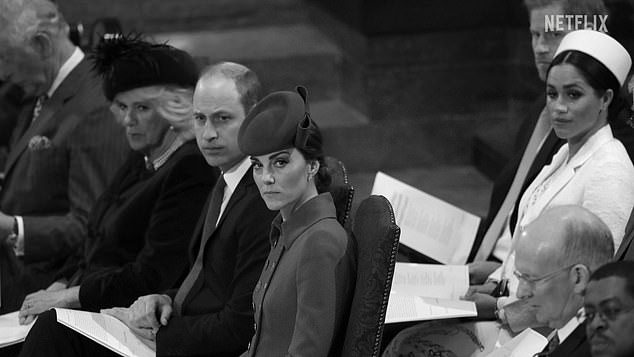 As well as including dozens of supposedly private pictures from their family album, footage shows a shot focusing on a pinched-looking William and Kate at the 2019 Commonwealth Service in London, with the Sussexes sitting meekly behind them 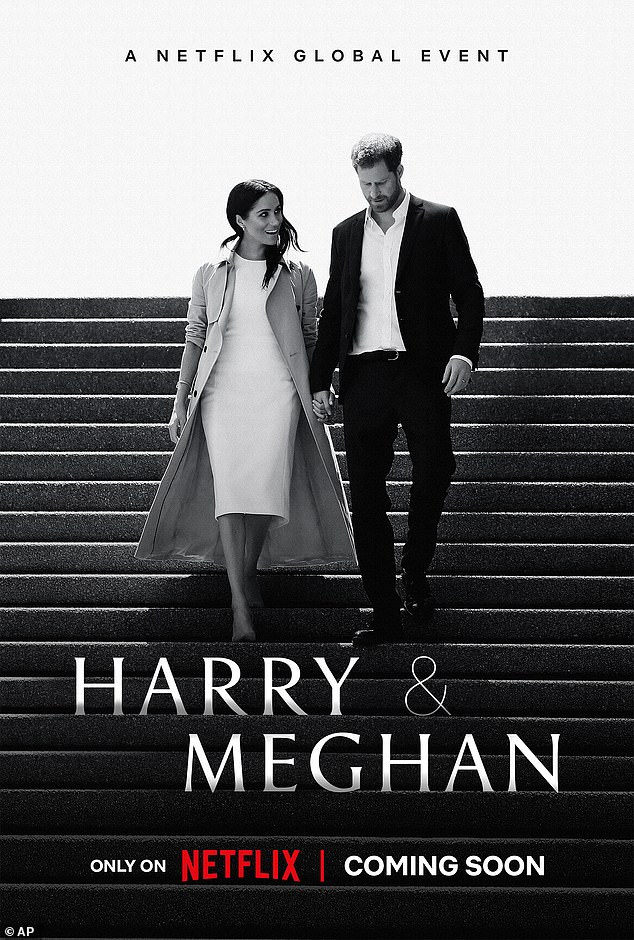 The Netflix series refers to the couple just by their first names – ‘Harry & Meghan’. The trailer for the documentary was released on the same day as William and Harry’s joint and heartfelt letter for charity

‘Have another enjoyable evening and a very Happy Christmas.’ The letter was finished off with a joint signed signature from the two princes.

However, the ongoing war between the brothers continues as Harry and Meghan’s new Netflix documentary – believed to be coming out on December 8 – suggested a ‘declaration of war’ and included a sinister photograph of Kate Middleton.

The minute-long Netflix teaser strongly suggests the Sussexes will confront rumours about their tempestuous relationships with senior royals head-on.

In a deliberately tantalising remark to a producer off-screen, Meghan says in the clip: ‘When the stakes are this high, doesn’t it make more sense to hear our story from us?’

Royal insiders reacted with horror towards the trailer while experts said it had been ‘deliberately timed’ to take away from William and Kate’s US tour.

Royal commentator Richard Fitzwilliams said the timing of the trailer release ‘draws attention away’ from the Cambridges’ trip to Boston.